ANZ and Deutsche Bank tell it like IT is

I was struck by some commentary with John Cryan, the CEO of Deutsche Bank, over on Bloomberg.

The article is talking about the wild ride he has had since taking over the helm of the bank which had formerly been run by two CEOs (Juergen Fitschen and Anshu Jain). He knew when he took over the bank was a basket case, tarnished by a raft of regulatory and legal problems which include probes into alleged manipulation of benchmark interest rates, mis-selling of derivatives, tax evasion and money laundering. This has led to a rollercoaster share price, reaching an all-time low last September when the bank’s market capitalisation sank to almost just a few billion, when investors thought the bank would need a bailout by Angela Merkel.

That didn’t happen and the bank has bounced back a bit, but it still has big issues such as finding a vision for the future for the bank. What will it be after it has shed its dead skin? That’s unclear right now. Then there’s the investigation into Donald Trump’s affairs, with Deutsche Bank being his largest lender ($300 million to the Trump empire so far). Then, as Bloomberg notes, “none of Cryan’s strategic moves will make much difference if he doesn’t purge Deutsche Bank of its chronic legal difficulties. In an era when global lenders have racked up about $300 billion in penalties for myriad misdeeds, Deutsche Bank has stood out as a repeat transgressor”.

But the biggest issue seems to be their IT, and it strikes me that this is a bank whose systems are rotten to the core. Literally. Here’s a critical two paragraphs from the Bloomberg analysis:

Cryan’s ability to move quickly is hampered by the bank’s IT, which is so “antiquated,” to use his word, that many of its systems aren’t performing important functions with the speed or efficiency they should. Cryan says Deutsche Bank’s IT is five years behind what its rivals have. “It’s not as good as it should be,” he says. “It’s not as timely as it should be. We have to go across too many systems.”

When news leaked last September that the U.S. Department of Justice wanted Deutsche Bank to pay $14 billion to settle a probe into its sale of toxic mortgage-­backed securities, the lender suffered its worst haemorrhage of liquidity since the crash. At one point, private banks and money managers pulled $10 billion in a single day, according to a person with knowledge of the outflow. Even though Deutsche Bank was sitting on about €200 billion in cash and liquid assets, its computer system was too slow to report to regulators exactly how much it held on a daily basis.

I remember laughing at Cryan’s comments in January, during the World Economic Forum, when he said that technology would be key to banking in the next five years. The reason I laughed is that he was making the statement that should have been made in 2012 or even earlier, not in 2017. But it does show the challenge for a big bank. In fact, big banks are becoming more honest about these things, as demonstrated by another bank I’ve laughed at: ANZ. I shouldn’t laugh at them really, but some banks are easy targets when they say how proud they are of their forty-year old core systems.

This was last summer, when I posted a series of blogs attacking ANZ for their complacency.  I have been told that these blogs had an impact, as things have changed a bit in the last year since ANZ persuaded Scott to leave the bank, and that may be reflected in the honesty that their new Chief Digital Officer, Maile Carnegie, brings to the bank.  Maile is formerly the head of Google for Australia and New Zealand, and she shared her views last week on what it takes to shift a legacy business into the 21st century. From Australia’s CMO, here’s the key messages she gave last week:: 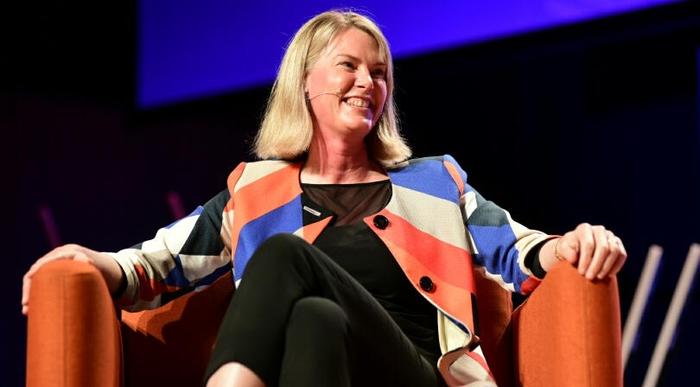 Describing culture as one of the biggest obstacles of any transformation, ANZ’s group executive of digital banking said table stakes is having a CEO with skin in the game. But beyond that, another initial barrier is what she called the “frozen middle”.

“Increasingly, most businesses are getting to a point where there are people in their organisation who are no longer are experts in a craft, and who have graduated from doing to managing and basically bossing other people around and shuffling PowerPoints,” she claimed.

“That frozen middle will resist change like death. It exposes that they have no skills any more. Figuring out how to deal with the frozen middle, once you have the boss’ support, is the big thing. If they’re not going to become craftsman and learn anymore, they need to move on.”

Most companies aren’t change fit, Carnegie continued. “It’s a muscle you need to exercise,” she said. “At Google or Adobe, you’re changing all the time. Your job will be redefined all the time and you’re used to it. But going back into a legacy business, that’s not the case.

“A lot of that is because change has meant job loss, and there’s fear. People need to be made more comfortable with change.”

In addition, most leaders don’t realise culture and change management is a science. “You can engineer culture,” Carnegie said. “Many think it’s an opaque thing, but it’s actually a scientific set of inputs and outputs. Getting senior leaders and direct reports to understand that if you change these levers, it will change the culture, is the other education barrier.”

According to Carnegie, becoming a 21st century company is about owning capabilities first and foremost. “These companies haven’t lobotomised themselves, or outsourced future knowledge to partners, and have created capabilities internally,” she said.

It also takes a different leadership model. “If I compare Procter & Gamble or older companies set up to win in the 20th century, still haven’t let go of command and control leadership models,” Carnegie continued.

“With 21st companies, leadership models are all distributed. Senior leaders have the courage and humility to say I’m going to delegate leadership down. That makes a lot of 20th leaders very uncomfortable.”

Typically, this comes with different levels of aspiration, Carnegie said. “Older companies have incremental aspirations. Going forward, if you don’t have what feels like an almost unachievable aspiration, you will fail,” she said.

What’s also become obvious in a world where digital and social channels dominate engagement is that there’s no distinction between you as individual, and what you say and do publicly.

“There is so much opportunity for your internal culture to leak out,” Carnegie pointed out. “You see companies who say they champion people with sexual differences, but then if you look at policies, they’re full of it. There has to be congruency between those two things.

“If you want good customer experience, you have to have good employee experience.”

To get there, Carnegie advised figuring out the overlap between personal passions and the change agenda. “As a leader, if you don’t have a high degree of personal passion for why you’re there and why you’re trying to championing change, they will smell it,” she said.

Passion is also important because championing change is exhausting, Carnegie said. “You need an organic, renewable energy source to keep going,” she said.

Carnegie joined ANZ as head of digital nearly 12 months ago with a remit to reshape how the company works with customers. Her short-term goal was to get the definition of digital transformation right.

“What we’re trying to do is fundamentally re-wire the engine of the bank,” she said. “To digitally transform a company, you have to recreate the engine to take advantage of existing and future technology. But that’s not how 20th century companies have been wired.”

Rather than the “sexy apps and shiny new toys”, which Carnegie suggested are “very episodic and won’t sustain”, the focus at ANZ has been to achieve deep, strategic clarity around transformation and ensure that definition is understood by the leadership team.

In terms of capability, Carnegie cited data and technology as obvious musts within a digitally charged organisation.

“The other one that’s bleedingly obvious… is that you won’t survive unless you are incredibly sharp on customer centricity and can create winning customer propositions,” she added. “There is so much transparency now over your value proposition. The ability to hide that behind smoke and mirrors is going away.

“If you don’t have extraordinarily sharp focus from every organisation on your customer value proposition and driving that, then you will just fail over time. It has to be at the core of any capability transformation.”

I always remember a phrase from a Tom Peter’s video twenty years ago, talking about business transformation in Union Pacific Railroads in the USA. One of the team said: “the organisation either wears you out or waits you out”. So true, but if banks can get leaders who are unwilling to let those choices pervade, then they might just create a third choice to create an organisation that wrestles you out of that legacy thinking and creates a transformation fit for the 21st century.

Chris Skinner is best known as an independent commentator on the financial markets through his blog, TheFinanser.com, as author of the bestselling book Digital Bank, and Chair of the European networking forum the Financial Services Club. He has been voted one of the most influential people in banking by The Financial Brand (as well as one of the best blogs), a FinTech Titan (Next Bank), one of the Fintech Leaders you need to follow (City AM, Deluxe and Jax Finance), as well as one of the Top 40 most influential people in financial technology by the Wall Street Journal’s Financial News. To learn more click here...
@Chris_Skinner
Previous Things worth reading: 27th July 2017
Next Is FOMO driving you MADD?

I bumped into a real API marketplace the other day. Just what I’ve been looking …