Several friends have been sharing very personal stories online recently about their childhood, their challenges, their career mistakes, their changes, their everything. I’m not one of those. I’m a private guy, and guess the one thing I’ve shared that most people appreciated is my blog about: the greatest thing that ever happened to me was redundancy.

However, I have decided to share something, and the reason I’m doing it is that, like my friends, you have to see the silver lining in this storm. Some people say that 2020 was the worst year ever. Their dreams went up in smoke; their personal and professional  plans were put on hold; they burned their way through savings and finances are in a mess; being locked down with the family  is the worst experience ever, with arguments on regular occasion; the queue for divorce lawyers is growing longer every day … and more.

I’ve been through all that too, but 2020 was a great year for me. I spent more time than ever with my twin four-year old boys and we got a puppy, who I have a love-hate relationship with (he loves me and I …).

Anyways, during the lockdown, quite early on, I would read stories to my boys every night. We would have superhero stories in the daytime – I’m The Hulk – and then nicer stories at bedtime about Gruffalos and Winnie-the-Pooh.

One day, I got fed up with reading these stories, feeling that Batman and Spiderman – even the Lego versions – were a bit too mature for four-year old boys, whilst Beatrix Potter and Julia Donaldson were not engaging the boys enough, and were maybe too immature for them. There was a gap in the market for small people – something that would excite them, but not too much fighting or scary stuff, and that would be adventures, rather than just sweet.

So, I dropped the books and decided to make up a story.

The story was a really silly one about a plate of food that comes to life. The plate of food has a slice of Victoria Sponge Cake, some Chocolate and Jelly on it and, for some reason, a sweet potato. They come to life because a ray gun beam hits the plate, and the food is transformed into Captain Cake, Lieutenant Chocolate, Sergeant Jelly and Private Potato.

They become the crew of the space ship The Sweet Candy and have to travel through space to sweetly go where no sweet has gone before.

The boys loved it, especially Lieutenant Chocolate, and so I started to make up stories every night. Before I knew it, ideas were flowing everywhere and I’d written many stories about The Candy Crew – as Captain Cake, Lieutenant Chocolate, Sergeant Jelly and Private Potato became – on their spaceship The Sweet Candy.

As I had these ideas, I decided to float them past my publishers, Marshall Cavendish, and was amazed when they came back to me with a contract for five books about their exploits and adventures.

The first book is launched today (with free shipping worldwide and also available on Amazon) and it’s about the origins and special superpowers of Captain Cake and the Candy Crew. We meet the Candy Crew, find out their origins, learn about their characters and super powers, and the special attributes of each character. Captain Cake is fearless; Lieutenant Chocolate is logical; Sergeant Jelly is brave; and Private Potato is practical. We learn what that means through the fun stories of their origins and beginning their first mission together. 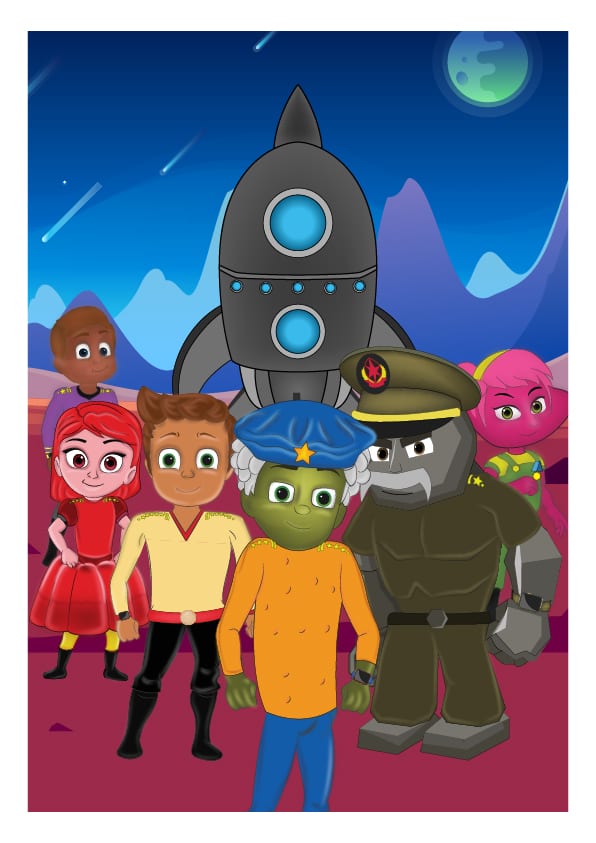 Book 2: Commander Pickle’s in a pickle General Rock has asked the Candy Crew to find the secret vanilla recipe looked after by the Vanilla Queen on Planet Froth. Whilst looking for the recipe, Sergeant Jelly finds a Treasure Map with an X. Captain Cake decides they need to fly and find the treasure. They arrive in Lavaland and find a village, where they meet General Rock’s mum. She tells them a secret. Should they keep it?

CAPTAIN CAKE AND THE CANDY CREW: CHASING THE ROTTEN TOMATOES

The spaceship Smelly Onion is manned by The Rotten Tomatoes, who are determined to cover the planets of our solar system with a terrible brown goo. The Candy Crew must stop them, but will they arrive in time? They manage to stop them covering Earth in goo, but the Tomatoes are blasted onto Venus, where they start to do bad things. What will The Candy Crew do? CAPTAIN CAKE AND THE CANDY CREW: SAVE THE VEGGIE CREW

Book 5: Save The Veggie Crew

The Veggie Crew are a nice crew of vegetables who fly The Big Sprout spaceship. Unfortunately, they got stuck on Earth in earth, with Captain Cabbage, Lieutenant Broccoli, Sergeant Potato and Private Carrot all waiting for help. The Candy Crew are sent to get them out of the ground, and Private Potato saves the day. She then gets an offer to join The Veggie Crew and promoted to Colonel Potato. What will she do?

Meanwhile, a few early copies reached the hands of my friends and family.

This is Karen’s daughter in Kuala Lumpur.

And my nephew’s daughter wouldn’t let her brothers read the book as she liked it so much!

Whilst this young chap …

… liked the book so much, he sent me a review!

Checkout captaincake.com to find out more, and Captain Cake book 2 is being released later this year, focusing on Commander Pickle who’s always in a pickle.

Chris Skinner is best known as an independent commentator on the financial markets through his blog, TheFinanser.com, as author of the bestselling book Digital Bank, and Chair of the European networking forum the Financial Services Club. He has been voted one of the most influential people in banking by The Financial Brand (as well as one of the best blogs), a FinTech Titan (Next Bank), one of the Fintech Leaders you need to follow (City AM, Deluxe and Jax Finance), as well as one of the Top 40 most influential people in financial technology by the Wall Street Journal’s Financial News. To learn more click here...
@Chris_Skinner
Previous Things worth reading: 12th July 2021
Next Things worth reading: 13th July 2021

Imagine if business was driven by ESG

Where is the banking revolution?

Bezos in Space … at what cost?

Order or chaos … you decide

I’ve been isolating too much and watching too much TV. Binging on Netflix, Amazon Prime …

When shit hits the fan, we've got your back