What is a secure data vault and should a bank be one? 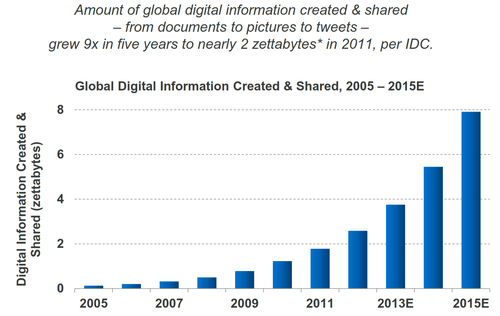 I gave a presentation the other day and, as usual, concluded
that banks should position themselves as data vaults.  One person then asked: what data should a bank make secure? which is a good question to
ask, as it led to a healthy debate and improvement of clarity of view.

Today, we produce exabytes of data every hour.  How much data?  Well, it’s hard to quantify as the data
explosion of the last decade is so immense, but this slide gives you a good
idea: This slide is taken from IDC’s research “Extracting Value from
Chaos”, sponsored by EMC,
and a presentation by Mary Meeker on key internet trends.

This slide shows that, from 2005 to 2011, the
amount of information being created and shared rose ten-fold to almost 2
zetabytes (2 trillion gigabytes), and is increasing every day.

Now not all of that
information is that critical.  Some is
erroneous, some transient, some time dependent and so and so forth.

For example, and just
to put this in perspective:

So I’m going to take a pop at this mountain of data and say
that data is increasing at around 2 zetabytes a year today, of which 65% is
redundant data, e.g. spam and transient.

That leaves around 665 exabytes that has some value.

Some of this is important but not critical, and some worthwhile
but not that important.  Using the third
to two-thirds dynamic, this would mean that around 220 exabytes is important
and 70 exabytes critical.

It is this last category that may be leaked by Wikileaks, so
that’s the stuff that people want to secure.

It is here that banks can make their data vault offer.

Secure data with the bank and pay for that security.

You would probably find that although people may feel their
data needs to be secured because it’s critical, only a third would pay for that
security, so now we have our figure: 20 to 25 exabytes of data per year is the
sort of data that people would secure and pay for.

How much do they pay?

Well, what’s it worth to secure those photo albums you currently
post on Facebook of your child being born and its early years?

What is the value of those emails confirming your contracts
over the last year?

How much would you pay to keep your Bitcoin account secure?

And how would it work?

It would work by downloading a bank offered app that, once
installed, allows you to tag any data with a padlock (see bottom of photo, doubleclick to enlarge).

That padlock tag moves that data into the
bank vault, where it is secured.  If you
ever then lose that data, your disk gets wiped, you accidently delete it, your
Facebook account is corrupted, your backup is destroyed … you can guarantee to
get it back from the bank vault.

That is the bank’s guarantee, and that has value.

That’s up to how much the individual wants to pay.

Like an insurance policy, if you value your data at £1 million,
then you pay the bank an insurance premium for the bank vault’s guarantee.  Let’s say it’s around £250 ($400) a year for
secure, backed up and defended or £100 a year for secure and backed up.

£250 a year for a guarantee that the tweets, posts, updates,
blogs and stuff you produce is guaranteed to be secure and backed up, or secure
and defended.  I imagine quite a few
folks would pay for that:

Of course, a bank does not necessarily need to make this
offer of course.  Google could.  Or Facebook.
And, if they did, maybe they could offer to look after your money too.