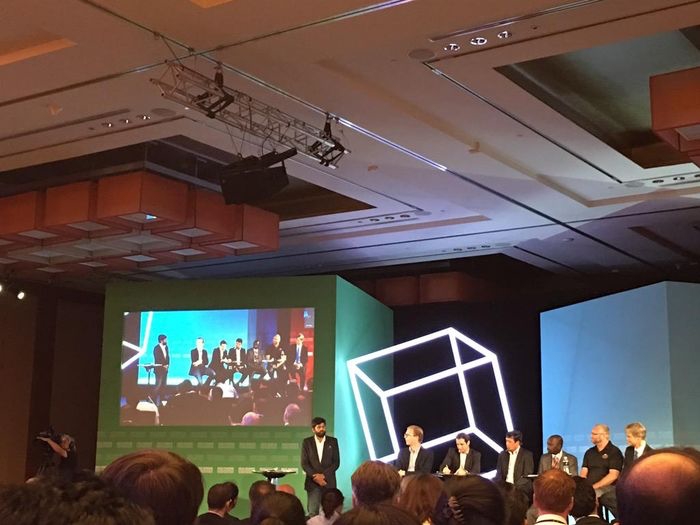 Although I'm missing this year's SIBOS, I'm grateful to FSClub sponsor VocaLink for providing this summary of the session I would usually co-moderate:

The Innotribe session next up at 11am on Day 1 of Sibos 2015 addressed the ‘Future of Money’. It examined if banks are sitting on a burning platform that will be disrupted by a wave of innovative new startups which will take away their payment and transaction business.

The Sibos 2015 Future of Money session moderator, Udayan Goyal, Co-Founder and Managing Partner of Apis Partners, introduced the debate in Singapore by explaining that it would focus on disruption in the credit arena specifically, having looked at Bitcoin, the blockchain and other disruptors in previous years and in a separate standing-room only session earlier in the day at the Innotribe stand, “The people on stage today will change the way credit is scored, distributed and given,” he said, while also referencing the ways banks, FinTech startups and others will compete and sometimes cooperate, with his strange new word “co-opetition”. In his opinion, Co-opetition best describes how banks and technology companies are interacting. They are ‘frenemies’ in other words.

Julian Kyula, Founder and Group CEO of Mode, was also on the stage as his firm uses mobile telco, utility and other information to analyse data flows. In common with peers Mode filters the data it collects through a behavioural software platform before deciding upon the appropriateness or otherwise of a loan, how best to route it, and so on.

Neal Cross, Chief Innovation Officer at DBS Bank was the only banking representative on the stage. He said it was “an honour” to be up there with the startups on stage, which were providing “a wake-up call to banks”. He also amusingly referred to how he’d dressed down in his polo shirt – he was the only one that had. All the start-ups at the payments-focused Innotribe session use big data analytical techniques to try to outperform banks, often in emerging markets where traditional credit checking structures are not yet so well established. At the very least big data credit scoring and delivery techniques could be used to lock banks out of fast-growing economies in Africa, India and elsewhere where branch banking networks don’t yet exist to a large extent.

As the final on-stage panel member, Gottfried Leibbrandt, CEO of SWIFT, sounded a warning to the disruptors, however, kick-starting the ‘bank’ response when he commented that: “The hard part is not making the loan. It’s getting the money back.”

The Banks Respond
A debate ensued with five heads of innovation and strategy at the banks responding to the FinTech startup challenge. Situated at the back of the packed Sibos conference room, which was standing room only, were representatives from Wells Fargo; Lloyds Banking Group; Bank of New York Mellon; Standard Chartered; and Euroclear.

Kreditech’s  Graubner-Mueller kicked off the Bank v Startup argument by provocatively declaring – after their innovation programme overviews – that: “I’ve heard a lot of talk about innovation here, but not really heard anything innovative [from the banks].”

That drew a sharp response from DBS Bank’s Cross, who lived up to his name, as he explained that they run hackathons to encourage the nimbleness of startups at his internal bank teams. Cross added that it was his “job to change the culture” at his bank, which was easier to do at a smaller bank such as his, in comparison to one of the larger established Tier 1 banks represented at the back of the Sibos 2015 Innotribe conference room.

“How many startups are left, excepting PayPal, M-Pesa and a few others,” responded Steve Ellis, EVP and head of group-wide innovation at Wells Fargo, as the debate got lively. Ellis added that many mobile transactional products and other new developments had actually been started by banks, payment providers or other so-called traditional players, which were eminently capable of innovation themselves.

It was also mentioned during the ‘Future of Money’ Innotribe debate that it is important to remember that many newcomers rely on the architectural rails set up by deposit-takers. These financial institutions (FIs) are subject to regulations that startups are simply not subject to.

Leda Glyptis, Head of the EMEA Innovation Centre at Bank of New York Mellon, had an interesting perspective on the debate as an ex-startup employee that has since joined a bank. “The drive for API banking means that banks will soon be able to approach startups and ask ‘what can you do for us’.” The co-operative model was obviously more of interest to her than the co-opetition model on the spectrum of the debate.

Banks have two big advantages, concluded Iwoca CEO Rieche: “Your deposits are state guaranteed and you have large customer bases built over time. Only one of those advantages [i.e. the first] will stay.”

The battle between banks and startups has commenced with the co-operative space yet to be fully found, but it is clear that disruption is well and truly here in the payments sector.