One company that is seeking global domination is Ant Financial. The company has an open stated intention to reach two billion users by 2025.  The way in which they’ll achieve that is through local partnerships, and many of those have been started already:

The above partnerships are ones where Ant Financial has a strategic interest.  Others are more tactical, and aimed to provide coverage in parts of the world where Chinese tourists can be found:

And then there are strategic acquisitions, of which the major one under way since January 2017 is Moneygram for remittances.  Countered by a bid from Euronet, the acquisition has fallen fallow for a while now, which is why Ant Financial is refiling for review with US decision makers this week to determine the outcome.

All in all, it almost feels as though the firm is moving at lightning speed to build a global prescence. For example, Stripe announced Ant Financial integration with their APIs this week, along with BBVA announcing a rollout of Alipay in Spain. In fact, it almost feels like there is a new strategic or tactical move every single day. Why so much activity? Well, the overall focus is upon inclusivity and to bring the 4.5 billion unbanked and underbanked into Ant Financial's cheap, simple and easy mobile financial ecosystem. It is a laudable ambition and, building upon my blog earlier this week about global FinTech specialist players partnering, Ant Financial is already a long way down that route.

That is why I’ve been in Hangzhou this week, to find out in depth what is happening from those who know.  Meantime, if you haven’t been following this closely, here’s a good analysis of what has been going on from Caixin Global, the English version of China Economics & Finance. 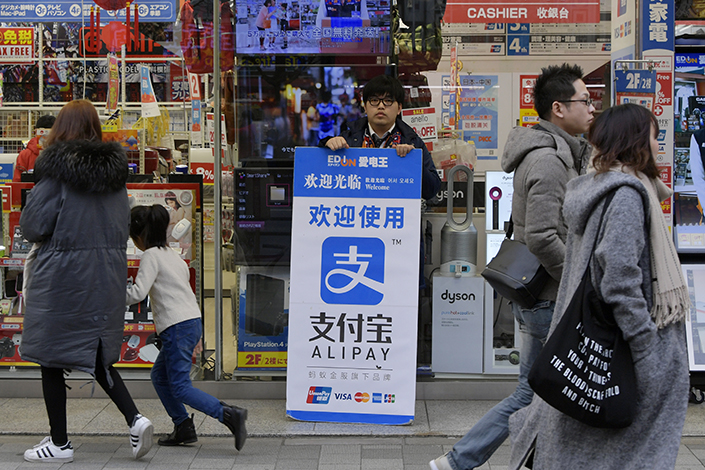 Ant Financial Services Group is forging partnerships in Asia, Europe and the U.S. in an ambitious bid to connect its payment service, Alipay, with more customers and merchants globally. Above, a store employee holds a billboard promoting Alipay in Akihabara area of Tokyo on Jan. 29. Photo: Visual China

Ant Financial, the former finance arm of e-commerce giant Alibaba Group Holding Ltd., last week announced a partnership with U.S. credit-card processing service First Data Corp., which will allow Alipay users to make payments at the 4 million U.S. merchants served by First Data. The deal came while Ant Financial was pushing for another deal to get a foothold in the global payment market via a $1.2 billion bid for U.S. money-transfer specialist MoneyGram International Inc.

Only one month ago, Ant Financial clinched two other deals in Asia, including an internet finance joint venture with Indonesian media group Elang Mahkota Teknologi (Emtek) and a $1 billion acquisition of Singapore-based payment provider HelloPay. In previous months, Ant Financial made investments in Thailand, Philippines and South Korea to expand its footprint in local payment markets.

“There will be more partnerships in other countries to promote Alipay globally, especially in developing countries,” Jia Hang, Ant Financial’s senior director of international business, said in early May.

Ant Financial, which is preparing for a public listing that may value the company at more than $75 billion, is picking up steam in overseas expansion along with the growing outbound flows of Chinese tourists and business.

The overseas buying spree means lucrative business opportunities for payment providers like Alipay, which is offering services in more than 70 countries and regions to help its users make payments, exchange currencies, and get tax refunds at airports, shopping malls and merchants. The company has set a goal to connect its services with 1 million merchants worldwide in three years.

A Chinese executive of a French retail multinational said Alipay is welcomed in France because about 80% of customers who shop at the country’s luxury shopping malls such as Galeries Lafayette are from China. “Most Chinese prefer mobile payments, so Lafayette will surely accept it,” the executive said.

In late April, Finland’s tourist authority held a meeting with major retailers to promote Alipay, which has partnered with Finland’s largest mobile-payment provider, ePassi, to allow Alipay users to make mobile payment in Finland stores. Alexander Yin, chief financial executive of ePassi, said ePassi, which serves 600,000 users in Finland, now has access to Alipay’s 450 million users in China.But Ant Financial’s ambition extends far beyond serving Chinese tourists overseas. Through the partnerships it developed with foreign payment and financial institutions, the company is distributing its technology and business model worldwide and laying the groundwork for a financial-service network that may eventually challenge Visa Inc. and MasterCard Inc.

“Ant Financial’s overseas expansion will not rely on one certain product or capital. It will mainly rely on its technology and customer-service experiences,” Jia said.

Ant Financial has been counting on local partnerships to spearhead overseas ventures rather than taking the riskier path of going it alone in overseas markets. “Local partners are more familiar with their domestic market, financial industry and regulations in order to make sure the ventures comply with local rules,” Jia said.

According to a source close to Ant Financial, the company acquired minority stakes in most of its recent overseas venture deals in the hope of avoiding possible hurdles to getting financial licenses. But Ant Financial was granted significant minority status in most deals, allowing it to oppose the entry of new investors it doesn’t prefer, the source said.

Ant Financial has been mapping out its overseas strategy since 2015 when the company invested more than $900 million for a 40% stake in Delhi-based One97 Communications, which operates online payment service Paytm. Under the partnership, Ant has provided both cash and technology investment into Paytm and has sent tech support teams to Paytm to help develop products, improve its systems and risk-control capacity, and carry out marketing campaigns.

With the help of Ant Financial, Paytm has enjoyed a tenfold growth over the past two years and became India’s largest payment provider with more than 200 million users and daily transactions exceeding 11 million, while Ant Financial has extended Alipay’s market reach and brought its technology standards to India, including its popular quick-response (QR) code payment technology, which allow consumers to pay for goods and services by scanning a bar code with their mobile devices.

The transaction still needs U.S. regulatory approvals. A source close to the matter told Caixin that “MoneyGram is very important for Ant Financial” in its overseas expansion, as the U.S. firm’s cross-border remittance business will fill a hole in Ant Financial’s international operations. MoneyGram has more than 350,000 locations in 200 countries and a network of 2.4 billion bank and mobile accounts around the world.

Currently, Alipay’s cross-border money transfers are handled mainly by China Construction Bank and Citic Bank, which jointly settled $6 billion in overseas remittances for Alipay in 2016, according to sources close to the company.

Expanding cross-border cash flows have fueled risk concerns. A bank executive said each money transfer handled by banks for Alipay is usually packed with thousands of small transactions involving numerous individuals and small vendors, which poses a great challenge for banks to check the authenticity of every transaction.

“Some of these transactions may involve money laundering risks,” the bank executive said.

Last week, the central bank imposed 30,000 yuan ($4,300) fines on Alipay and its major rival, Tenpay, operated by messaging giant Tencent Holdings Ltd., for failing to ensure that at least 90% of its users are registered with real identification based on the rule set by a 2016 document for non-bank payment companies.

“Theoretically, even 0.1% of accounts that are not registered with a real name can create an opportunity for money laundering,” a bank employee said.

The surge of cross-border payments made by Alipay is also a difficult task for regulators to supervise, according to capital-flow rules. China’s foreign-exchange regulator currently requires each individual to exchange no more than the equivalent of $50,000 in foreign currencies each year.

A central bank official told Caixin that cross-border payments handled by internet payment providers involve money transfers of the yuan and foreign currencies, which are overseen by separated departments of the central bank, as well as the State Foreign Exchange Administration. In light of the fast growth of online cross-border money transfers, the central bank is considering unifying regulatory responsibility to enhance supervision, the official said.

Greater challenges may come from traditional payment market giants, such as China UnionPay, Visa and MasterCard, which are gearing up their efforts to tap into the mobile-payment market. China UnionPay, the country’s sole bank-card association, has partnered with 17 commercial banks and 2 million merchants in China to promote its own version of QR-code payments and get a share of a market that has been dominated by Alipay and Tenpay.

Analysts expect bank-card associations’ foray into QR-code payments will bring profound changes to the market as their models are believed to be more transparent and secure compared to the lingering security concerns of services provided by payment companies.

“Regulators in many countries haven’t got time to evaluable and think about the changes Ant Financial will bring to local payment industry. What they see now is immediate profit,” a source at Visa said.