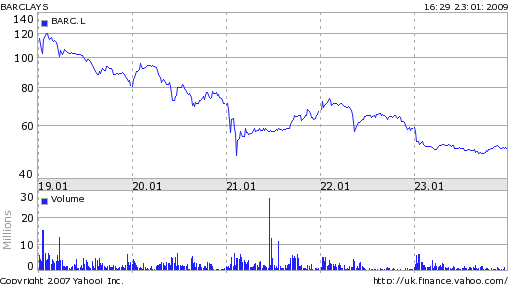 Barclays, Citi, BoA … things can only get better

Last week was a joyride wasn't it?

We saw the inauguration of a new President in America, Heartland Payment Systems had a malware that infected and disclosed pretty much all the card details of every American citizen, the UK government pumped a further £200 billion ($300 billion) into the banking system and effectively nationalised Royal Bank of Scotland, and Swansea knocked Portsmouth out of the FA Cup!

Mind you, all of that is nothing compared with the wider market picture, in particular the Barclays Bank disaster.

Plenty has been written about this:

The story was really all about confidence, or a lack of it, from the investment community, combined with short selling.  I've already blogged about what's wrong with Barclays, and don't want to harp on about them.  Equally, a few other bloggers, such as the Financial Ninja, have written some good insights too.

The bottom-line is that Barclays is sick thanks to investors bailing out big time, closing the week at 51.2 compared with the week's opening of 120p and a 52 week high of 512.5, ten times the value today: No other bank were quite as badly off as Barclays, but many didn't fare much better.

Citi, for example, continues its' own 'death spriral' with shares languishing down at 3.47 compared to a 52 week high of 29.73.  Citi is still struggling to get the balance sheet back in order, and tapped into a further $12 billion of government's funds.

Again, I've blogged a lot about Citi and think that William K. Black, former lawyer at the Federal Home Loan Bank of San Francisco and Office of Thrift Supervision,got the quote of the week on this one: "It's insane to leave it in the control of the people who have every incentive to cover up the scale of the losses."

That's why CEO Vikram Pandit is now being told what to do as he breaks up the bank by the FDIC and friends.

It may also be why Chairman, Sir Win Bischoff, who had only been there since the end of 2007 stepped down early.  He is being replaced byRichard Parsons who has been a director at Citi since 1996, and is well known as the former CEO of Time Warner.  Before joining Time Warner, he headed Dime Bancorp, a New York-based savings bank.

Interesting comments on this one too, such as Patrick from Taiwan: "What Citi needs is a complete new broom not a long time director who
must also share the blame for allowing the group to get where it is.
Funds, deposits and clearing clients will be leaving anyway with the
sale of SB (Smith Barney) so now other depositors will follow. The Citi is asleep or
comatose."

If you really want an insight into Citi's new regime, there's a very good analysis in the Financial Times.

It doesn't stop with Citi though, as John Thain left Merrill Lynch last week too.

His resignation followed hard on the heels of their new parent firm, Bank of America, revealing a $15.3 billion loss in the division last quarter.   Maybe that's why a bank spokesman said: “It was mutually agreed that Mr
Thain’s situation was not working and he would resign.”

I bet it was, as in Ken Lewis walked into John's office and said: "You're fired!" just like Alan Sugar in the Apprentice.

After all, the Financial Times reports that Thain apparently "brought forward about $4 billion in discretionary bonuses, paying them
out in the narrow window after the sale of Merrill was agreed but days
before the deal was actually closed.  This wheeze went down just
as Merrill headed into record $21.5bn operating losses in the fourth
quarter and BofA started seeking additional taxpayers’ funds from the
troubled asset relief programme to digest its acquisition."

All this, just as the bank is making over $40 bilion in losses for teh year.Mind you, shareholders are doing a good job of impersonating Alan Sugar too, as they line up and point to Ken Lewis and ask him to get lost too.

According to the Financial Times: "Pressure is building on Ken Lewis to resign, as more shareholders file lawsuits accusing the embattled chief executive of Bank of America
of mismanagement and a state prosecutor ramps up an investigation into
an accelerated schedule of bonus payments at Merrill Lynch last month."

They didn't like the fact that BoA did not perform appropriate due diligence to clarify Merrill's losses before absorbing them, nor warning shareholders of what was to come a week last Friday and, in particular, that BoA paid a 70% premium for the acquisition.  Some premium.

So, last week was pretty rotten week all round for these guys.

The thing is, this will all come to an end soon.  Can't say when, but it will.  So let's hope this week improves for these banks, the markets and for all of us.

Meanwhile, for one bank, last week was actually a good week.

America's largest surviving bank decided to send around a little analysis which one of their clients forwarded to me (double-click on the chart itself to see it in larger text): The chart basically shows that banks have lost almost all of their capital, particularly Citi, RBS, Barclays ... in fact all of them except Santander, HSBC and - surprise, surprise - with the least loss of value, JPMorgan, the bank who sent this chart to their clients last week.

Nothing like a little competitive digging during a crisis, is there?