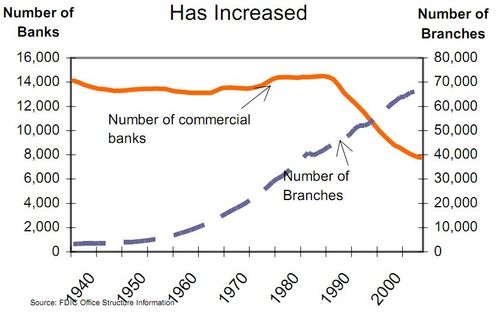 Bank branches are not dead

We’ve had lots of discussions about the branch being dead. I’ve had many here, whilst lots of other websites and blogs have done the same.

For example, my mate Brett King recently wrote a blog entry: “If your bank is opening branches – get worried” with some great stats:

Let’s get one thing clear: the bank branch is not dead.

Although I’ve been accused of saying so, due to the title of one blog entry, I’ve actually never said the branch is dead either.

The branch is alive and well across the world.

By way of example in the UK, Santander is growing their branch base whilst Metro Bank is opening many new branches over the next few years.

Does this mean that branches are a good thing however?

Now here I could quote lots of stats and facts here, and will point to lots of articles at the end that corroborate some of the views I’m expressing, but the branch is not a good thing if it’s there for the wrong reasons.

The wrong reasons include keeping a branch in position because you’re worried about loss of depositors.

From the New York Times  article “Bank Branches Slow to Vanish, but Why?”: “The truth is, apart from concerns about solvency, bankers say there’s nothing quite like shutting a local branch to make customers think about moving their deposit relationships.”

The wrong reasons include having a branch in place that is nearly 100% processing transactions.

I have a local branch where four tellers sit behind glass windows, taking deposits in the form of cash and cheques all day long from queues of people who look like they don’t want to be there.

This is a branch ripe for automation.

Cheque and cash deposit machines would wipe out 99% of that branches traffic and, looking at the cost to income ratio, shows there is no logical justification for keeping this branch in continuance.

The wrong reasons include keeping a branch in position because the competition has branches there.

That may have made sense once, but not today when the cost of running, maintaining and servicing the branch could be ploughed into more useful activities, such as online services.

So there are many wrong reasons for keeping a branch running.

There are many right reasons too.

The right reasons include branches that are maintained as the client base and demographic in the branch makes it worthwhile. This may be because the branch operation is such that there are many high net worth individuals in the locality or businesses.

We spent a long time looking at branch locations when data warehousing first appeared as a technology.

What the data mining techniques tried to do is to act as an engine to find which branches were ripe for closure and, if so, what the implications would be.

I still remember one branch that appeared to be in a remote location that was hardly used was viewed as ripe for closure … until the customer base in that branch were found to be amongst the most profitable segment of the banks’ retail deposit base.

Therefore, the branch was maintained even though it was hardly used.

There’s a right reason potentially for keeping a branch in position.

Another right reason might be because the branch has a strategic importance.

Its strategic importance may be nothing to do with demographics, but with the location being in a vicinity of prime footfall or prestige. It may be that the location attracts new business as it is a landing point for migrants.

There are too many branches that are purely there due to historical perspectives; they languish with old technologies and dilapidated furniture, fixtures and fittings; their customers have to queue for too long and use pens chained to counters in what appears to be more like a Post Office than a bank.

These branches must be either refurbished and reinvigorated, or shut down.

But let’s come back to the core point: branches are not dead.

Branches are alive and well.

The bank just needs to know why they are alive and well, and what they’re there for.

It’s the last bit that I call into question these days.

Oh, and by the way, that idea of branches closing? No.

US bank branches have increased over the past decades. Source: Bank Branch Growth Has Been Steady— Will It Continue? By Ronald L. Spieker for the FDIC, 2004 (pdf)

And they will stay that way as volumes of contact are maintained in branch. Here’s a few other interesting PDF reports and links for those who want to know more: